After the statue of Brus-Li in Mostar, another fighter for justice will get the deserved statue in Balkans 😀 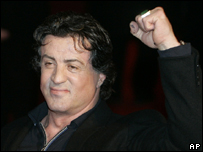 Sylvester Stallone was made famous for playing Rocky Balboa

A tiny village in Serbia says it will construct a statue of the film character Rocky to ward off decades of bad luck.

An official from Zitiste, about 55k (33 miles) north of Belgrade, said the statue of Rocky was needed to give the village a more positive image.

Zitiste has suffered serious damage from floods and landslides, earning it a reputation for being jinxed.

Many of its residents have left the village in search of a better future.

The idea came from Bojan Marceta, a village resident, when he saw the latest Rocky film “Rocky Balboa”.

“I felt as if Rocky has come from our village, he had to fight to win his place in society,” he told B92 radio.

Zoran Babic of the local council said he and other officials agreed with the plan.

“This is the chance to give a better, more positive image to Zitiste,” he said.

Mr Babic said villagers had already been in touch with officials in the US city of Philadelphia, where a Rocky Balboa monument has already been erected.

“We have also contacted a sculptor who has designed the statue, asking him whether he would help us,” he told AFP news agency.

The film “Rocky”, a story of a boxer who gets the chance to fight the reigning champ, won three Oscars for best picture, best director and best film editing.

Its star, Sylvester Stallone, has recently released “Rocky Balboa”, in which the character comes out of retirement to fight once again.