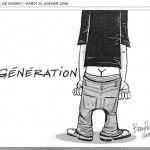 I have been thinking about writing about Generation Y for almost 2 months already, and still am thinking quite a lot about the topic, especially when it comes to analyzing GenY in Serbia… I promise I will write my comments about it very soon, and ’til then enjoy this fantastic text that Sandra shared with me today.

If you are not familiar with what the term Generation Y stands for, do click here first.

Five ways Gen Y will change the way you work
Don Tapscott on Millennials: ‘Show us the wikis, not the money’

The Millennials are coming – armed with Facebook accounts and netbooks, the latest generation of young workers are entering the workplace ready to raze traditional touchstones of business to the ground.

Web 2.0 evangelist Don Tapscott – author of tech titles including Wikinomics and The Digital Economy – is forecasting a “big conflict” in the office, sparked by the generation of 11- to 30-year-olds who are determined to reshape the workplace in their own image.

Talking to silicon.com about his latest book Grown Up Digital, Tapscott laid out five “generational firewalls” that bosses need to tear down if they want to attract the brightest and best of Generation Y.

“We do the opposite of what we should be doing, which is learning from this culture,” he told silicon.com.

“The whole paradigm that you train, you supervise, you compensate and you retain – all of those are wrong.”

Understand that in their age group there is a new culture of work: the social network is the new operating system for business.

If you have a great collaborative environment, that is going to be way more attractive to them than paying them lots of money and tightly controlling the way they work.

For example, US electronics retailer Best Buy has a social network for employees called Blue Shirt Nation, with 70,000 people at the electronic water cooler every day who are coming up with great ideas that are being implemented.

You always see the same argument: ‘Why should we embrace this new thing? The old ways have always worked.’

It results in better performance and better innovation in business – that is why we should adopt these practices, because it’s good for us.

That also means giving employees freedom of work – having the ability to work at home and to set their own hours – and allowing employees to have custom job descriptions – as they do at Deloitte.

“Young people see email as good for sending a thank you letter to an aunt but not much else.”

“The internet is increasingly about building community, not providing content – it offers a way for people to self-organise to create communities. That is why Facebook beat Match.com, why bloggers are beating CNN.com and why Wikipedia is beating Encyclopaedia Britannica.”

“They are going to move into the cloud, in much the same way that electricity companies moved away from the practice of having their own power plants onsite during the early days of electricity.”

“They will be replaced by mobile devices.”

“They will be replaced by small always-connected devices with a high degree of mobility. The personal computer was always an oxymoron for me, it’s like the idea of personal sex. The purpose of computing is to communicate.”

“This is headed for the ashcan of history. Everything in a report will have an XML tag called eXtensible Business Reporting Language.” [This provides an identifying tag for each piece of information which is computer readable so the machine can understand what data it is handling].

Rather than spending so much on training people, why not invest in increasing the learning and collaborative components at work?

It’s called knowledge work, where work and learning is the same activity. Why shouldn’t work be fun?

The training department at my company nGenera is that everybody must blog on a regular basis.

Why isn’t every job like that? Where working and learning are the same thing, you increase the learning component for day-to-day activities, so you get both better learning and better work.

There are all kinds of new ways to harness human capital without it being inside your boundaries at all times.

The talent does not have to be inside: at Procter and Gamble half of its innovation team are outside the company.

There is a case in Grown Up Digital of Denis Hancock, who is running the Wikinomics blog – I will have hired him five times by the time he is 32.

I am creating an alumni network I can draw on, it’s so good to have Denis but I don’t try and retain him.

I communicate with Denis on a social network and occasionally he shows up at the office. I’ll take him anyway I can get him.

It’s about how you architect a corporation and about rethinking how you orchestrate capability.

At their fingertips employees have these powerful tools of social networks and what do we do with them? We ban them, we ban Facebook.

There’s no security issue that you can’t handle – for Pete’s sake, the CIA have a social networking wiki, called Intellipedia, the way you get better security is by opening up and sharing information.

I heard the same arguments 15 years ago from people who did not want the internet in their company because they were afraid there would be security violations and people would be wasting time.

These are called implementation challenges, they are not reasons to not do it but things that you need to take into account.

Instead, initiate relationships with your potential employees at an early age using social networks.

A corollary of that is don’t spend money on advertising for recruitment – it’s a waste of time, better to get a big pile of money and burn it.