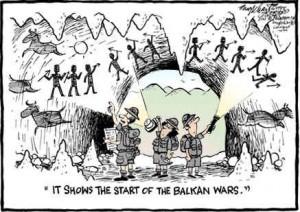 This definition is circling in Serbian for some time already, so I decided to translate it for all of you.
Balkans – plain on which the Romans beat the Avars, then Avars and Slavs beat Romans, and then Slavs beat the Celts and Avars, and then were beaten by the Turks and the Hungarians and Bulgarians, who were also fighting among themselves, and finally The Turks were defeated, while Slavs were left to beat the Hungarians and Bulgarians, supported by the Austrians, who were helped by the Germans, for whom it was not enough to be beaten once, but they came for more, and in the end, when there was noone else to beat, the Slavs began to fight against each other.