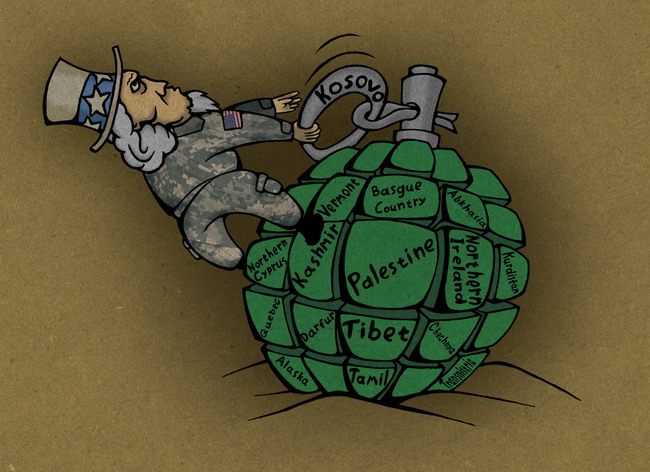 “Legal experts said that while the International Court of Justice had ruled that Kosovo’s declaration of independence was legal, it had avoided saying that the state of Kosovo was legal under international law, a narrow and carefully calibrated compromise that they said could allow both sides to declare victory in a dispute that remains raw even 11 years after the war there.”
From: http://www.nytimes.com/2010/07/23/world/europe/23kosovo.html?_r=3&ref=world

And I’m not saying this as a Serbian nationalist from Kosovo or anything. It is a disgrace because  an institution that is supposed to use the logic and common sense (whatever that is in this case) decided not to decide at all (!!!), and left the politicians in the UN to play the game and make a “final decision” withing the General Assembly of the UN. An easy parallel would be if the pedagogues in the kindergarten would be asked for an opinion on who is right and who is wrong and they just tell the kids to decide themselves. Who wins? Bigger and stronger, of course, and in most cases those that won’t ever admit they made a mistake.

This way, all they did was to pretty much retain the status quo for now. Both sides will read between the lines in their own ways and we are still far from any kind of a decision. Disgrace!

What has this shown us? Only one thing, in my opinion – that ICJ doesn’t have cojones/balls/muda to do their job.
I mean, since the ’90s, we are being told that we have to deal with what our leaders and people did in the past, been that Srebrenica or whatever else. And we pretty much have dealt with it. I don’t know many people in Serbia that don’t accept Srebrenica as a crime against humanity, and don’t feel ashamed that someone of our kind did that. Sure, there is still a lot that needs to be discussed and accepted on all sides in that bloody war, but we are going into the right direction. As a whole region, that is.

However, what we have in this case is that a major institution – International Court of Justice, which was created to deal with such situations, clearly rejected to show some courage and either confirm that independence is OK, or admit a mistake and support the negotiations about the final status.

What kind of a crap is that? Were they afraid to make a decision that either USA or Russia will not like and thought that this way they won’t get in a position where one super-power doesn’t care about and overrules such decision (remember USA and UN)? Or were they just afraid that a clear decision will spark either fights between Albanians and Serbs or enforce secessionist movements in many regions in the world (Catalonia, to start with – check out the reaction of their PM yesterday, or Armenians in Azerbaijan, or Cyprus situation – check how quickly Germans issued this press release)? (check also other reactions here and here)

I honestly believed that this agony will be finished, whatever the decision would be… Honestly… For the sake of  the youth that should grow up learning about important things and enjoying life and not watching the news and looking forward to find a way to get a passport and leave the country. I honestly believed that international community has balls to make a decision and stick with it.  And, believe it or not, I was ready to accept that Kosovo will not be part of Serbia anymore. I knew it would be hard, but I was ready to cry my ass off and feel miserable for some time. For the sake of the future.

But that was until yesterday. Who is going to convince me today that it is OK to be OK with losing Kosovo? Nobody. Ever. Again.
I’m OK when someone proves me wrong. Someone with a clear idea why I am wrong and he/she is right. But who can prove me wrong here? Someone without a stand?
And stupid rhetorics about “de-facto situation” or “it would be too hard to get back there and convince Albanians that living with Serbs is OK” doesn’t work anymore. It’s just absurd.

And don’t think I’m becoming a nationalist. Nope. Never been, never will be. My thoughts are on a much higher level. I’m actually sure now that my old idea about the need of the  World War 3 and “restart of the system” is actually very good. Couple of nukes would probably help solve all the world’s problems. Am sure that Mr. Bush and Clinton would agree with me, along with all leaders of NATO countries. Don’t you agree?

That, or and old idea of Mr. Arthur C. Clarke (somebody reminded me of this idea today):
“Any teacher (leader) that can be replaced by a machine, should be!”
Machines think logically. They know only 1 and 0, true or false. Their logic cannot be affected by Monica Lewinsky, Mr. Putin or fancy Mr. Obama and his administration. They don’t know what the word “inat” means. They don’t give a fuck. That’s why I love computers.